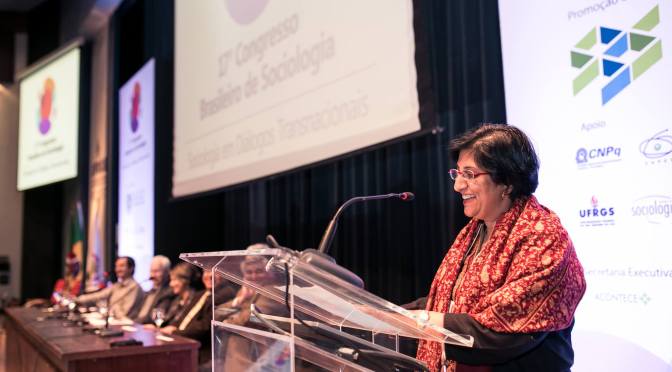 We had the pleasure of interviewing Margaret Abraham, current President of International Sociological Association (ISA). Last year, she came to Brazil  to participate in a series of academic events, and Circuito Acadêmico couldn’t have missed this unique opportunity. We discussed topics about circulation of knowledge, gender inequality and activism in the social sciences. Have a look at the interview and enjoy the reading!

In your opinion, what does it mean to be a woman from Global South in the position of ISA Presidency?

Well, I see myself as a global citizen. Yes, I am a woman from the Global South as I lived my formative years in India and it has framed my lens in many ways, but I have also lived in the United States since

1984 and as such I am transnational. However, I think it is important to recognize here that there are many Global South women who are actually located in the Global South who bring important critical perspectives, histories and contexts for us in the international community. For example,  the scholars and activists located in Latin America, including here in Brazil, who do incredibly transformative work on a range of gender issues and in addressing inequality and justice.

As ISA President, I see myself in the wonderful and exciting position to be a woman from the Global South, but one who is also shaped in multiple ways from my experiences in the Global North. Becoming the ISA President is a significant breakthrough in terms of gender as a woman, but also as a woman of color in the context of the Global North. We have had eighteen Presidents and I am the second woman. Margaret Archer, from the UK was the first woman to be an ISA President (1986-1990) and that was over 25 years ago. This is a huge step, in ensuring that women are increasingly represented in leadership roles within the ISA and I am grateful to all who made this possible.  So, it’s a great honour, but what is equally important, is the use this leadership role as an opportunity to build a stronger presence of sociologists from the Global South so that the ISA is truly global.

In your experience, what are the challenges to overcome the gender inequalities in the social sciences? Could you propose some alternatives for them?

I think, first and foremost, more recently, social sciences in general have been under attack. Governments and granting agencies have

reduced funding for them. Universities in many places are reducing the faculty and courses. There are certainly gender inequalities in some fields and in some institutions, in terms of faculty salaries as well as in terms of the proportion of women to men in part time positions.

There are differences in value between disciplines as well as the influence of market forces that are increasingly shaping universities as businesses and students as customers in narrow ways that negatively impact the learning environment for students and teachers. There is also gender inequality in terms of the division of labor, where women do a disproportionate amount to of the teaching and service component and get less time for research. Yet research is often more valued than teaching and service when it comes to salary increases and promotions. I think we need to see that all three components are valued and weigh equally or we do a fairer distribution of such responsibilities. Then there are also issues around parental leave and other important benefits in the work place.

However, the challenge that we have to overcome is not solely of gender inequalities in the social sciences but that of the hierarchies of knowledge production. That is, whose knowledge is being presented upfront and disseminated and who has the greatest access to resources? If you look at the social sciences, even in sociology, for a large period of time we have seen that there hasn’t been that kind of gender equality, both in terms of salaries, but also in the perspectives that have dominated the discipline. I mean, for many of us the social sciences have been dominated by the Global North and predominantly the sociologists who we have learned about are male sociologists.

So, to me, this is a very important aspect that is now being increasingly challenged and rectified by post-colonial theorists,

critical race theories and feminist scholars of color and through peoples’ histories and by everyday sociologists.  As sociologists, how do we transform knowledge production dissemination, but also how do we ensure that at academic institutions that there is more gender equality and diversity? How do we ensure that the work that women and minorities do, not only in terms of research, but also in teaching and service is valued and not measured by a different standard? Very often, there is a kind of imbalance. You know, we still live in patriarchal institutions. While there are some changes, especially in the rhetoric around gender, if you look at it, women, especially minority women, still encounter considerable obstacles and discrimination in the workplace. It has been slowly changing, and I think one of the ways to transform is to mobilize and also ensure that progressive competent women are in leadership roles in institutions where key decisions are made.

We as teachers also need to be cognisant about selecting articles to read and teach that rectify some of the existing gender gaps in our syllabi and our research. We need to change policies in the workplace in terms of laws. Women in the social sciences, actually in other fields too, have a lot to give. However, I think for substantive transformation to happen, we need to take a multipronged, multi-level approach that is done through rethinking research development, curriculum development and placements in institutional leadership roles. We need mobilization, and social science data to show historic and existing inequalities, and new framework and a strong commitment to working at changing policies and practices that will ensure greater equality and social justice.

Science, in particular social sciences, and activism could go together? Are there risks or advantages in doing so?

Well, you’re talking to somebody who very seriously believes that the social science should in many ways link research and activism. I see myself as an action-researcher. I am a big proponent that some of the best sociology can be done when we actually translate the knowledge that we have into action, in some way, for transformative change. And, yes, of course, you know there are people who talk about the risks and say that there are biases in the work that we do. We know that “objective” data, including some statistics, have their fair share of biases in the presentation of results. We need to draw upon both quantitative and qualitative data in research.  Clearly our research should be rigorous but this in no way should preclude us from linking such research with action. I am not saying that all research can be translated into action or that all researchers have to be action researcher but I do believe that the tumultuous times we live in require us to use our sociology to help influence policy and practice.

I think some of the best kind of research can be done and linked to activism if we actually do this across disciplines, too. And sociology is very well equipped to do this. I know of community based projects we have done for example on HIV or abuse, where the epidemiologists, policy makers, sociologists, psychologists and community activists all work together. The idea of being able to do collaborative work across disciplines is truly important. For many of us to be compartmentalised and to say “this is a hard science”, while this “this is the social science” is extremely problematic in today’s

world, because most of the issues that we need to solve, whether they are in health, whether they are about violence, whether they are about education really need us to come together, and actually translate our research into policies that can actually foster change in building a more better world. While there are differences among our disciplines, I think there are also all false divides and hierarchies that impact knowledge production, dissemination and values attributed to our fields. One important way that we can do research is when we go across disciplines, while being grounded in sociology. We can learn a lot from activists and collaborative work with communities too.  For those interested in engaging in research as action researchers, we have to be careful to avoid the risk of engaging in activism without having any time to do the research that is so critical for change.

If any student tells you they are about to give up sociology, what would you say to him or her? And could you also tell us about someone or something that inspires you?

If somebody told me that they were going to give up, I would ask why? I have had a few students tell that they want to give up sociology. Usually it is because they are concerned about jobs and then I spend time discussing what specifics concerns they have. Some have concerns paying back loans and for some it is not just the area of interest. There are many who are passionate about sociology and hope sociology will provide the frameworks and methodological skills that will help them in getting careers in academe, in government, in non-profits and, more recently in the area of law and public policy. I think sociology is a vocation and a profession. For me it is a way of life that can help transform our institutions, shape social justice issues and strengthen civil society. I feel so passionate about sociology that I hope I can persuade those students not to leave sociology.

You asked me earlier about who inspired me to become a sociologist.  Actually it was not one individual or one incident. It was the issues that came up in such a complex society as India with its history, including that of colonization, stratification, of the multiple identities that shape people’s lives and the resilience and strengths of people and movements fighting against discrimination, for freedom and justice.  A very important part was the brilliance of many of the teachers who taught me over the years both in India and in the US, scholar, feminist and critical race scholars and community activists who influence my sociological thinking and of course my family. Sociological debate and dialogue occurs very much at home among family and friends.

Circuito Acadêmico would like to thank prof. Abraham for her attention and kindness!