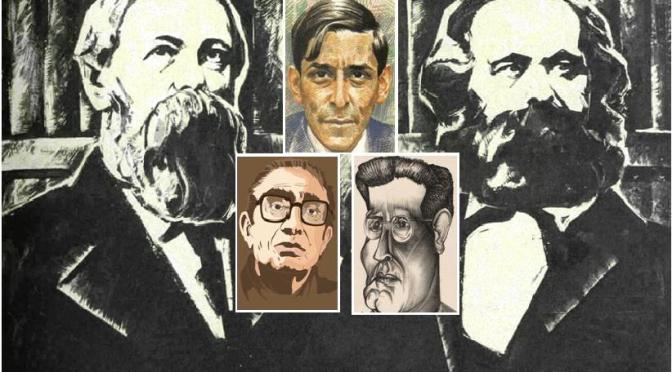 It is undeniable that in the contemporary world, capitalism was first understood in its complexity, in the fields of economy, history and social sciences, by Karl Marx and Friedrich Engels, in the 19th century.

I propose, by mentioning the Latin-American authors Carlos Mariátegui, Caio Prado Jr. and Florestan Fernandes, that Marxism was historically important for the epistemological readjustment of the social sciences in Latin America. For that, I will limit myself to the end of XIX and to the beginning of XX generations, who lived the start of the development of Latin-American Nation-States and experienced some nationalist governments in the continent.

I must point out that by being a practical and analytical instrument of altering the reality, or “praxis”, Marxism is characterised, perhaps in its essential sociological point, by the reoccurrence to the history of means of production to understand the modern social relationships. In that manner, the mentioned authors discuss matters of national construction and historical possibility of political change.

Before going any further, I must stress, as stated by Badiou (1975),  that Third-Worldism was heavily influenced by two sources: Lenin’s essay “Imperialism, the Highest Stage of Capitalism” (1916), that represents a milestone in comprehending the dependency between metropolis and colonies (Wallerstein, 1983); and Mao Tse-Tung’s book “On Contradiction” (1937), that tries to update Marxism as an intellectual and political rebellion tool in the Chinese semi-capitalist, subordinated by colonialism.

The Peruvian author, Carlos Mariátegui (1894-1930), focused on the development of his country in his book “Seven Interpretative Essays on Peruvian Reality” (1928). He argues that Peru is backward because of its means of production of the agrarian society, monopolized by the fusion between landowners and the bourgeoisie. If the higher classes are allied mainly because of ideological and economic interests, the country is not only backward, but also subordinated to the dictates of Europe and United States. That makes the local bourgeoisie an immature class. On the other hand, according to Mariátegui, Latin-American country has a native peasantry that represents a pillar of strength for change, along with the urban working classes. When he mentions the history of colonialism, Mariátegui makes what is perhaps his greatest intellectual contribution, since he recognizes not only the internal context of colonization in Peru, but also the complexity of “ayllu” native collective property. Unlike Soviet Marxism, Mariátegui believed that the native means of production would be a base model for the new material relationships that could be reached as alternatives to capitalism. It is not without reason that authors such as Michael Löwy (1998) consider Mariátegui the greatest Marxist thinker of Latin America.

Like Mariátegui, Caio Prado Jr (1907-1990) can be considered a precursor of Marxism in Latin America (Novais, 1983,apud Reis, 1999). The author is recognized, along with Gilberto Freyre and Sérgio Buarque de Holanda, one of the founders of the social sciences in Brazil. By using Marxism in national historiography, he sets in motions a new way of understanding Brazilian reality (Reis, 1999). During his intellectual path, especially in the books “Formação do Brasil Contemporâneo” (1942) and “A Revolução Brasileira” (1966), Caio Prado Jr argues that to import Marxism to Brazil, one must first understand the spatial, historical and social particularities of Brazilian society and then adapt Marxism to the national reality.

Contrary to the conceptions of Brazil as a backward country due to its semi-feudal situation, the author defends that the historical origins of Brazil, unlike Asia, has its roots in mercantile European capitalism since the beginning. According to Reis (1999), that way, Caio Prado Jr breaks with the conservative traditions of the country’s historiography, that didn’t see the social formations from a historic-colonial dependency process, which remains in contemporary Brazil.

Florestan Fernandes (1920-1995), a Brazilian social scientist, tried making sociology a way of critical awareness of social reality. The discipline which can also be called “critical sociology” consists of thinking the social reality from the historical roots of the national context. Unlike Mariátegui and Prado Jr, for instance, Florestan’s had a more eclectic approach to the social sciences, including classic authors such as Marx, Durkheim and Weber and even authors like Balandier and Mannheim.

According to (Arruda, 1997), Fernandes adopts, in Marx’s historical method, the attention to classes that made possible, through their economic exploration, the construction of the country. His many books, including “A integração do negro na sociedade de classes” (1964) and “Organização Social dos Tupinambás” (1949), feature natives, black people, immigrants, slaves and labourers as reoccurring presences in Brazil’s historic movement. Beyond classes, Florestan like the other mentioned authors kept his eyes on existing political processes. For example, in the book “A revolução burguesa no Brasil” (1975), he focused on the research and interpretation of Brazil’s conditions and possibilities for change, being a country like others in the continent marked by military dictatorship. This way, the author made an effort throughout his career to found a sociology that was genuinely national and yet open to foreign theories

I propose then, that each of these social scientists tried, guided by Marxism and in their own time and place, to understand the Latin-American reality; which is the first step to transform it in its material base, in a creative, original and profound way.